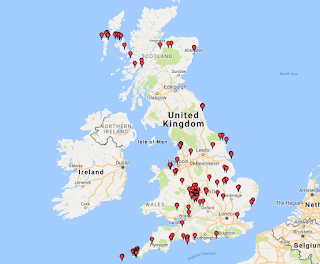 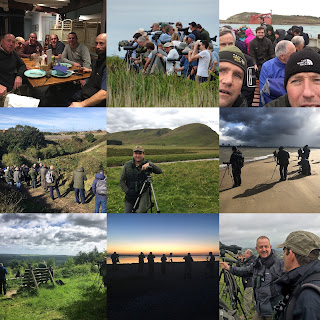 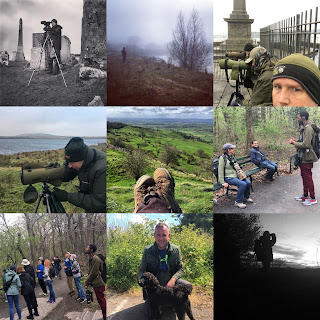 My car mechanic delivered by car back after it's MOT in late November with the line "You do some miles you do! " I did think I averaged around 15,000 a year, little did I know I'd actually clocked 26,000 between MOT's. Many thanks to all those birders I shared some great moments with throughout the year including New York, the Scillies, Scotland & Cornwall to name just a few. 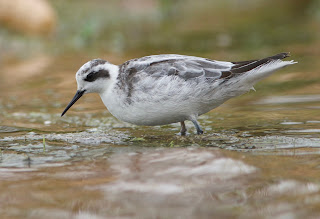 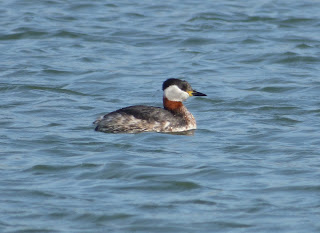 Despite the problems at Salford Priors we still managed to record 137 species with the highlights being the Red-necked Phalarope & the Red-necked Grebe. It's been very testing throughout the year but all the teams hard work was worth it with these great birds.

In terms of new lifers I managed to add a very reasonable 27 to the total which puts me in with a chance of reaching 400 by the time I'm 50 in 2021 (original target of July 2025). May & September were the most successful months with five each, whilst Dorset recorded four lifers. On the downside, the dip list included Red-breasted Goose, Black-throated Thrush, Caspian Tern & Greenish Warbler.

This year's locations have been very memorable, from the Outer Hebrides & the Highlands with the Captain to walking out in the dark to see the Elegant Tern with Tawny Owl calling, after leaving home at 1am it was definitely memorable. I managed to finish with 259 species on my year list which is my second highest to date. 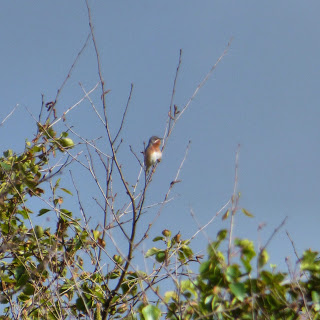 1) Eastern Subalpine Warbler - Staying on the Devon & Dorset border is ideal in late May to head either way & experience a real range of habitats. Day two of my Dorset break in 2017 changed dramatically when this beauty was found at Dawlish Warren. Thankfully I was parked & marching down to the reserve within thirty minutes of the bird being found. I had some cracking views and managed to take shot above before the warbler disappeared. This was denitaley a case of right place right time as the bird was not seen again. 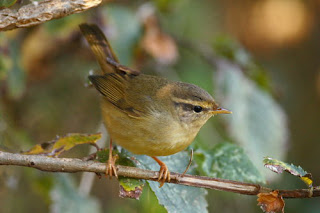 2) Raddes Warbler - A Saturday morning Suffolk raid was rewarded with a double thanks to a Red-throated Pipit at Landguard & then a Radde's Warbler just up the coast. Regular blog readers will know how this warbler was on my most wanted list for a long time. This Radde's is typically illusive however the Mayor & I re-found the cracker to get a short but impressive view. One of best moments of the year. 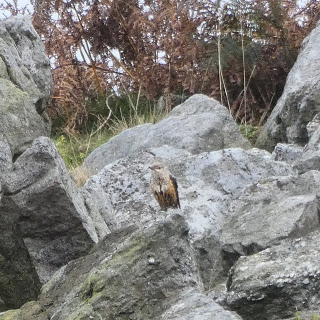 3) Rock Thrush - Pwll-du on the Welsh border delivered an unexpected bonus in October. Early reports were negative the day after it had been found but late morning news gave us the excuse we needed to head to Wales. A dramatic landscape made the sighting even sweeter & we managed to avoid the awful weather that we drove through heading home. 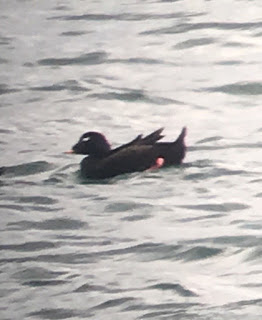 4) White-winged Scoter - A whistle stop brilliant weekend in Scotland with the Captain resulted in an addition for the year. This find was seriously difficult taking us many hours searching through thousands of sea ducks. Thankfully for us there were three other nutty birders, one whom re-found the duck to our delight. I'm already looking forward to next years barmy trip with the Captain. 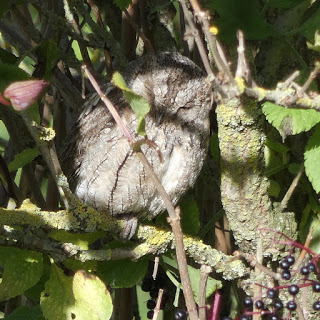 5) Scops Owl - My first attempt to see this Owl ended in re-direction to Spurn as this tiny bird opted to roost elsewhere on the day I booked off to go. Thankfully it was re-found on a week I had off work so despite the long drive to Sunderland, it was great to see this unexpected surprise. The last one was back in 2007 so certainly a good bird to see. 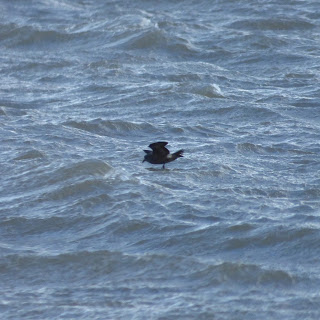 6) Leach's Petrel - We do some mad trips as birders and driving up to merseyside in driving rain & winds was certainly up there among the maddest. This was a very memorable mornings birding in many ways. To see these Petrels at all I would have been happy but the close proximity that birds flew past feeding on top of the water was astonishing. 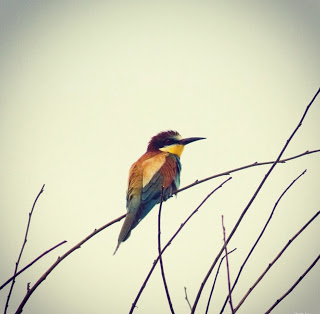 7) Bee-eater - Another species that was mythical for me as I was never in the right area when seen. Thankfully seven settled in Nottinghamshire which was perfect for a late afternoon twitch when news emerged. Sadly the birds didn't manage to breed but given how regular they were seen more will return next year. Certainly the most attractive bird of the year. 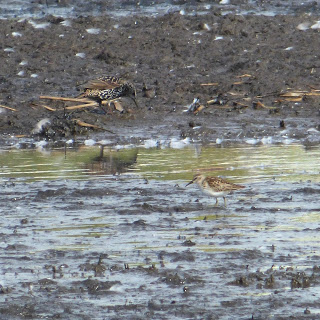 8) Least Sandpiper - How often do you get two lifers on same reserve ! Well this was a huge turn up in September at Lodmoor (again in Dorset) when both a Least & Stilt Sandpiper where within a very hundred metres of each other. It was a very long day but well worth it. 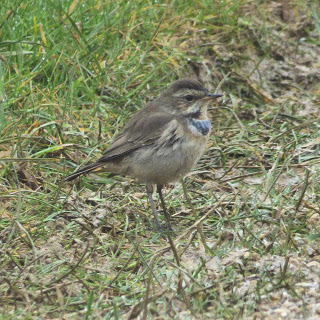 9) Bluethroat - I think myself & the Squire were the only UK birders never to have seen a Bluethroat prior to February. We thankfully broke this hoodoo when we caught up with a very obliging male Bluethroat at Willow Tree Fen in Lincolnshire. 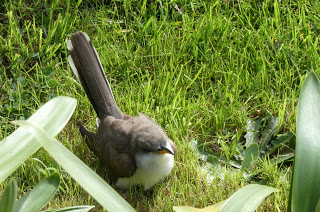 10) Yellow-billed Cuckoo - A crescendo of pagers went off as headed over to St Marys for our first trip in the Scilly Isles in October. Surely we can't be this lucky ! This exhausted Cuckoo was found on St Agnes so after a quick game of drop the bags & run we went to see this shattered individual. One of my most wanted American birds to see but only figures at number 10 as the poor bird was struggling.

Email ThisBlogThis!Share to TwitterShare to FacebookShare to Pinterest
Labels: Birds of Year 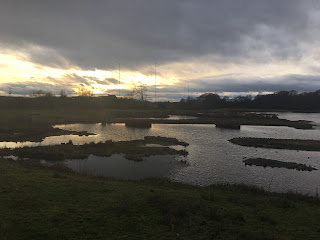 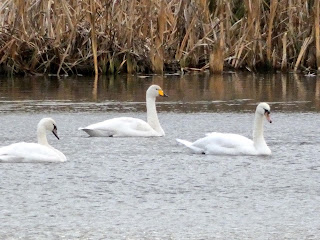 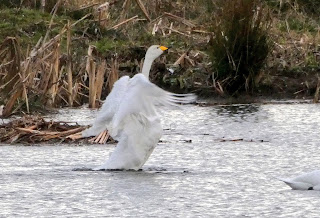 When updating a few records I realised I'd never seen a Whooper Swan at Upton Warren so after a very long cycle on the Christmas Eve morning I headed over for a late afternoon session.

Misty & overcast the long staying Whooper Swan did its best to avoid me sleeping on the side of an island I couldn't see from the east hide. A few gun shots from the local farm, apparently taking pot shots at Canada Geese, flushed most birds but did wake the sleeping Whooper. As I walked around from the east hide 10 Curlew fed in the A38 field whilst a male Peregrine watched from a distance.

When reaching the west hide I manage to get some great scope views of the Whooper Swan and other highlights included 7 Pochards, 2 Little Egret, Bullfinch, drake Wigeon & a calling Water Rail.
Posted by Neil Duggan at 00:15 No comments: 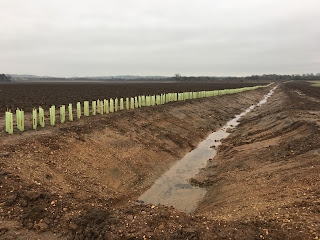 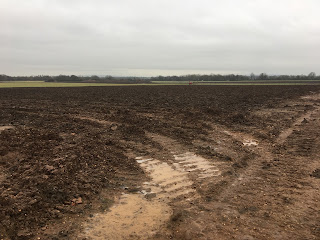 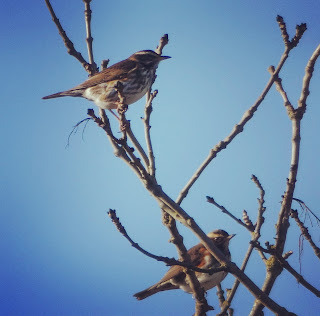 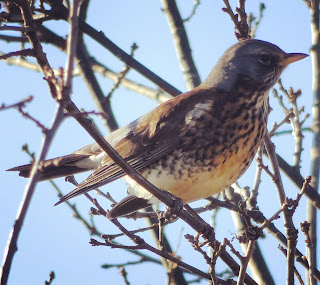 I've not really been able to find the words to blog about the gravel pits as my last visit with Jon really revealed the true devastation of the area. Whilst accepting restoration is always needed Cemex should never have moth-balled the site to save cash flow. This delay saw so many species of bird & wildlife settle only to now be completely crushed in the so called restoration.

After Jon & I had visited the site to do the WeBS count I decided enough was enough and the work of CEMEX needed to be shown to a wider audience. Many thanks to my followers who retweeted the photos and added their own words of dismay to the actions of this blue chip company.

We will have to see what 2018 brings however the pools at the far end will not be checked very often due to the access & distance.